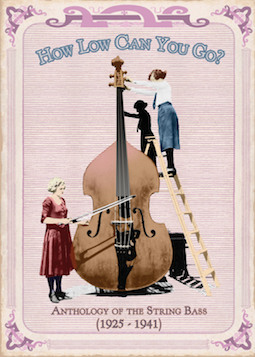 Compiled by Lance Ledbetter and Dick Spottswood, this three-CD box set, the first ever anthology of the upright bass, explores the earliest recorded history of the instrument. Without it, the revolutionary sound of American mongrel music of the last century would have been thin gruel indeed.
Not so long ago, the string bass stood tall and proud — roughly the length and breadth of a poor man’s pine coffin — in every musical aggregation throughout the land from Bangor to Buenos Aires, from the highest high life to the lowest lowdown: From tuxedoed symphony ensembles to tipsy calypso bands to honkytonkers in oil-field dives, from elegantly gelled tango orchestras to jazz combos in unspeakable speak-easys to methed-out rockabilly trios right off some flatbed.

Bass Player Magazine: “Few releases are as special and fun as this new 3 CD set, which uncovers the origins of recorded upright bass.”

New York Times: “Tuning into the bass with this particular sequence of records can clear up one of the most elusive qualities of early jazz: its deep relationship to all this other new-world music. In four tracks between 1929 and 1932, for example, we hear the bassist Al Morgan with the Trinidadian bandleaders Wilmoth Houdini and Lionel Belasco; we also hear him in New Orleans and Harlem jazz groups. His rhythmic vocabulary and relationship to the beat is much the same. This was how cross-pollination worked. If this particular light bulb hasn’t gone on for you before, it will now.”
（メーカーインフォより）