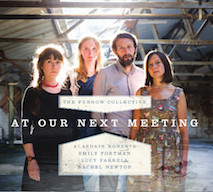 ☆Emily Portman is a singer, writer and concertina player originating from Glastonbury and hailed ‘one of the new British folk scene’s most beguiling presences’ (Uncut).
☆Alasdair Roberts is a musician based in Glasgow.  He is primarily a singer, acoustic finger-style guitarist, writer/composer of new songs and interpreter of traditional songs and ballads.
☆Lucy Farrell began lulling the folk scene with her rich and honeyed voice when she left her Kent home to study the Folk and Traditional Music course in Newcastle in 2004.
☆Rachel Newton, singer,harpist and fiddle player with The Shee and The Emily Portman Trio, is a highly sought-after musician, known for her prowess on both the acoustic and the electric harp and her singing in both Gaelic and English.