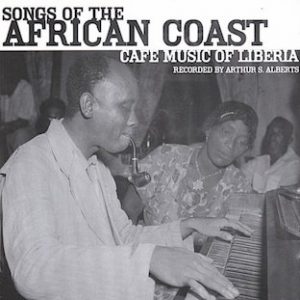 Yarngo Music is proud to announce the release of Songs of the African Coast: Cafe Music of Liberia. This unique recording includes music recording in the late 1940’s in Liberia by the noted ethno-musicologist, and my late Great Uncle, Arthur Alberts.
Arthur Alberts recorded music throughout Africa and in 1950 released the landmark 78 rpm set Tribal, Folk and Cafe Music of West Africa. The music on this release included a mix of genres as well as detailed notes by leading academics. The recording showed the intricate connections between African and American music.
This CD includes some of the music from that 1950 release as well as six compositions never previously released. This recording includes some the best known musicians from Liberia at the time including the blind Prof. Howard B. Hayes, Malinda Jackson Parker, and the Greenwood Singers. Not only were these noted artists, but all were well respected professional citizens of Liberia. Also included on this CD are extensive notes on the music and six beautiful photos taken by Arthur Alberts of the artists and never before seen by the public.
The compositions in many cases sounds almost like Calypso, or even early Jazz, and clearly illustrate the ties between American and African music. The 18 tracks on the CD were recorded live and have a warm feeling almost as though the listener is with the musicians as the music is being played.
The importance of these recordings has been underscored many times in recent years. Martin Scorsese sited the work of Arthur Alberts in his documentary The Blues. Mickey Hart, of the Grateful Dead, and the Library of Congress released in 1998 a selection of work entitled The Arthur S. Alberts Collection: More Tribal, Folk and Cafe Music of West Africa. And in the 1960’s both Dave Van Ronk and Joan Baez covered some of the songs on this CD in commercial releases.
It is my hope that you enjoy this CD as much, if not more, than I do.
〜メーカーインフォより