★Essential Tracks in the Making of Zimbabwe,
Compiled by Banning Eyre http://www.banningeyre.com 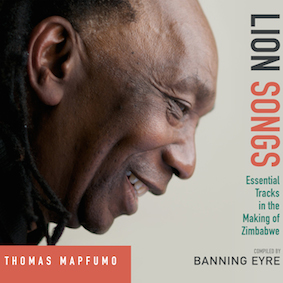 Tracks 1, 4, 7, 10, 13, 15, 18, 20, and 22 are all excerpts from interviews with Thomas Mapfumo. All were recorded by Banning Eyre, some for public radio’s Afropop Worldwide, some in Zimbabwe and some in the U.S., between 1988 and 2009. Mapfumo’s speaking voice is a thing of wonder, and communicates a lot about his nature and personality. More importantly, in these clips, you can hear in Mapfumo’s words the evolution in his thinking as a bandleader and a social critic.

Here is additional information about the songs themselves:

“Ngoma Yarira (The Drums are Sounding)” Mapfumo’s first adaptation of a traditional Shona mbira song. This 1974 track by The Hallelujah Chicken Run Band launched a central initiative in Mapfumo’s artistic career. His is the quieter, answering voice. The song’s lyrics suggest that war is coming to Zimbabwe, which indeed it was. Mapfumo created this song with lead guitarist Joshua Dube, and the original single was credited to both of them.

“Pamuromo Chete (It’s Only Talk)” This 1977 hit from Mapfumo with the Acid Band talks back to then Prime Minister Ian Smith, who had recently proclaimed that the country would not see black majority rule “in a thousand years.” He had to backtrack on that and accept the inevitable within mere months. Mapfumo re-recorded this song in 1999 for the album Manhungetunge. The original master tape of the 1977 single has been lost and it has appeared on no other compilation. Thanks to Samy Ben Redjeb of Analog Africa for providing this version, straight off the vinyl!

“Pfumvu Pa Ruzevha (Hardship in the Reserves)” One of the legendary “chimurenga singles,” this brooding adaptation of an mbira song is a classic, and a song that Mapfumo has continued to perform over the years. This is also from the Acid Band in 1977, and it expresses the suffering of people on the land during the liberation struggle. They were deprived of basic goods, terrorized by both sides in the war, and generally made powerless victims. This song tugged hard at the hearts of their relatives in the city. The lead guitar on this and “Pamuromo Chete” is played by Leonard “Picket” Chiyangwa.

“Butsu Mutandrika (Oversized Boots)” Soon after their formation in 1978, the Blacks Unlimited created this version of an older song that refers to the uniformly sized boots mine workers were forced to wear while working. Mapfumo’s boisterous performance, complete with whistling and brisk guitar work from Jonah Sithole, made this a big hit for his new band. In fact, it became so well loved that Archbishop Abel Muzorewa adapted the song as a theme for his ill-fated political campaign in 1979. Muzorewa won that election, but could not rule the country and was soon out of politics. Mapfumo’s association with that misadventure took some time to overcome. But the song lives on, still performed by Mapfumo today.

“Shumba (The Lion)” This 1981 mbira adaptation is a fine example of the mbira guitar sound that was becoming a staple in the Blacks Unlimited repertoire. The guitarists here are Jonah Sithole and Leonard “Picket” Chiyangwa, picking at their furious best. The lion stands for the spiritually guided guerilla fighters who won the liberation war.

“Chauya Chirizevha (Rural Life is Back)” A celebratory 1980 song sung at the end of the liberation war noting a return to peaceful life in the war-ravaged countryside. The final moments of the song mark include a name check for Zimbabwe’s new president, Robert Mugabe—a rarity for any politician in the Mapfumo canon.

“Nyoka Musango (Snake in the Forest)” This 1983 adaptation of a hunting song builds on the metaphor of “snakes in the forest” to suggest that the recently ended war has left dangerous forces behind, “dissidents” intent on reviving conflict rather than moving ahead with peaceful nation building. This also happens to be one of Mapfumo’s most resonant dance songs. Joshua Dube and Emmanuel Jera deliver the tangling guitars, with Washington Kavhai on bass in this new formation of the Blacks Unlimited.

“Magariro (Tradition)” This moody mbira composition, created by Mapfumo and his musicians in 1993, with Bezil Makombe and Chartwell Dutiro now on mbiras, and Ephraim Karimaura on lead guitar. The song asks what Zimbabweans will leave to their children and descendants now that they have abandoned so many of their traditional beliefs and practices. This fundamental message in Mapfumo’s work has rarely been so soulfully expressed as it is here.

“Corruption” This 1989 song (the CD jacket has a typo; it incorrectly says 1987) changed everything for Mapfumo. Composed and recorded in the wake of the Willowgate scandal, in which government ministers were found to be selling BMWs on the black market, the song pointed a sternly accusing finger at Mugabe’s regime. This was a first, and the start of Mapfumo’s public shift to become a vocal critic of the government he had once helped to empower.