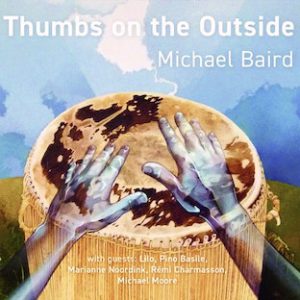 Zambian-born drummer/composer Michael Baird grew up with African music. Aged ten ‘repatriated’ to Britain – the homeland of his parents. Resident in the Netherlands since he was thirteen, started playing the drums in a school blues-rock band. Then modern jazz and latin, professional musician aged 20, also free impro and afro. Led own group Sharp Wood for ten years, with his melodic drumming at the heart of the ritualistic concept that became known as ‘Voodoo-Jazz’. From 1984 to ’94, Sharp Wood was one of the pioneers of ‘worldmusic’. Still with one foot in Africa, and also one in Europe, Michael continues along his own contemporary path of pan-African modernism and deep grooves! With nice contributions on this album by some friends…
About the album title: as any bush-driver will tell you, never have your thumbs on the inside of the steering wheel, as a hidden hole or dip can cause the wheel to suddenly jerk round and many thumbs have been broken that way. And so folks, on the journey that is life – thumbs on the outside!