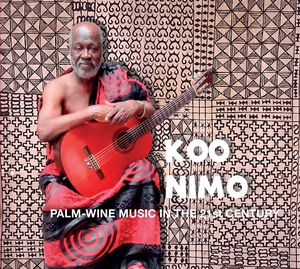 Agya Koo Nimo is a considerable transmitter of the awesome legacy of Folk music and storytelling music from West Africa. Born in the village of Foase, in the Atwima District of the Ashanti Region in Ghana, he worked in various jobs in science and medical-related field while maintaining his interest in music. In 1957, when the former British colony of the Gold Coast became the independent country of Ghana, Koo Nimo first received national acclaim through the formation of the Addadam Agofomma ensemble.
Many of his songs tell traditional stories and are sung in the language Twi. Along with one or two guitars and vocals, the traditional Ashanti palmwine ensemble consists of traditional instruments of West Africa, including the apentemma and the donno, the frikyiwa (metal castanet), the prempensua (rhumba box), the ntorwa (hollow gourd rattle with beads or seeds woven around it on a net), and the nnawuta (consisting of two iron bells that provide the key rhythmic pattern) or dawuro (banana-shaped bell).（サプライヤーインフォより）