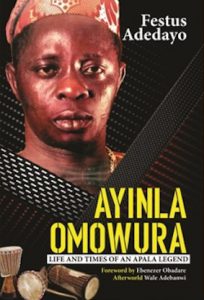 Ayinla Omowura: Life and Times of an Apala Legend is a narrative of the life and times of one of the most profound and unarguably, the most original Yoruba musician of post-colonial Nigeria. Murdered in a barroom brawl in Abeokuta, Ogun State in 1980, Ayinla Omowura, forty years after his untimely passage, has refused to die, both in the consciousness of the people of South West Nigeria, elsewhere, and on the lips of the people. Famous for his outlawry and romance with the banned substance called marijuana, Omowura exhibited a depth of musical profundity, scholarship and the captivating voice of a songbird, which are rare in contemporary Nigerian music. This book is thus an attempt to properly situate and reconfigure what Omowura represented to the postcolonial society. The book plots the graph of Omowura’s youth, his musicality, family, the fatality of his early departure and the events that led to his death. From the lens of family, friends, his songs and relics of people who interfaced with him while alive, a narrative is constructed here about the short life of music and society that Ayinla lived. He was a lay scholar, an ombudsman, autodidact and carrier of the cultural burden of his Yoruba people. Having tasted the pre and post-colony life, the latter being a time when noticeable conflicts were beginning to appear between traditional life and modernity, Ayinla taught with his music that the latter could only exist if the values of the former are embedded into it. Having lived a rough life at youth and the top of society that fame and wealth placed him in his latter life, Ayinla never recovered from the conflict these extremes posed. He never really realised the enormous roles expected of his rise to the top of high society. This, in part, was responsible for his murder. This sad reality and many more were engaged in this book. ( from Publisher Info）