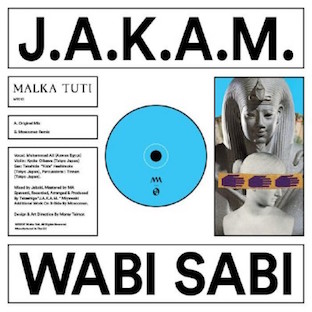 Jakam produced a track that both echoes the past and forsees the future, making our linear concepts and understanding of time irrelevant and obsolete, letting the dancer drift away in his mind to a world where ancient Aswan songs and drum-machine beats complete each other in harmony …. On the flip side you can find Disco Halal’s head honcho Moscoman, creating a peak time moment for every party…

The cave was illuminated with the glow of flickering torches. The walls were lined and engraved with ancient markings indicative of tradition and bygone heritage. This was a special place within which magic happened, the caves of Wabi Sabi. Many had sought entry to the sacred prism but had struggled to break through the intricate rock structure. Now as they looked down upon the space they wondered if they might ever leave. Who would want to return to the outside world?
(MALKA TUTI)