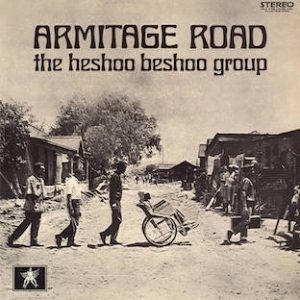 With a unique sound founded on a persuasive mix of American and African jazz, Armitage Road, originally released in 1970, was the only studio recording released by South Africa’s Heshoo Beshoo Group. As a highly prized collector’s item, a re-issue and re-appraisal of this lost gem from the apartheid era has been long overdue. Heshoo Beshoo loosely translates from the inter-tribal lingo of the townships as either ‘going by force’, or ‘moving with force’. That is certainly the case here. With its undeniably funky element Armitage Road combines graceful and moving playing with invention and passion, and it does not disappoint from start to finish.

The album artwork was inspired by The Beatles “Abbey Road.” It acted as a critique of the social conditions in South Africa at that time without overtly mentioning Apartheid and running the risk of being banned. The cover shows Cyril Magubane, who had suffered from polio as a child crossing the road in his wheelchair magnifies the difference between the world of “Armitage Road” and that of “Abbey Road.”

The album had a limited released in South Africa and France. It has long been a coveted release of collectors and jazz enthusiasts alike. The album has been remastered from a pristine copy of the French release, with updated artwork that pays tribute to the original imagery and text.