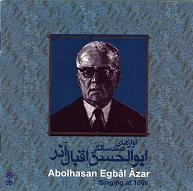 Abolhassan Eqbal-Azar (Eqbalossoltan) was born in a village called Alvand, 6 kilometers from the city of Qazvin in the northwest of Iran. The exact date of his birth is under question; it was probably some time in 1866. His father, Molla Musa, was one of the teachers in Haj Molla Salleh Qazvini Seminary. Unlike most seminary teachers, he made a living not by teaching but by working on his farm after school hours. Young Eqbal lost his father when he was only seven and had to move to the city of Qazvin with his family.
Eager to learn more, Eqbal took lessons from Haji Molla Karim Qazvini, one of the vocalists in Nasseredin Shah’s house. As a result, the young student soon mastered the different radifs of Persian music.
Upon his acquaintance with Darvish Khan and the other musicians of his day, Eqbal took a trip to Tblisi to produce a record and give a live performance. He was accompanied by Darvish Khan (tar), Baqer Khan Rameshgar (kamancheh), Seyed Hoseyn Taherzadeh (vocals) and Abdolah Davami (tasnif and zarb). …