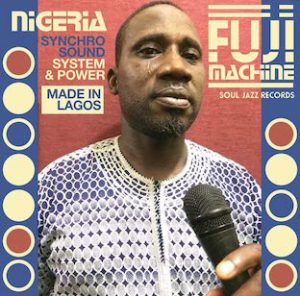 ‘Synchro Sound System & Power’ features the music of Nigeria Fuji Machine, which includes some of Nigeria’s finest ‘Fuji’ master drummers and singers, and is newly recorded by Soul Jazz Records in Lagos.

Fuji is the heavily percussive and improvisational style of Nigerian popular music, at once modern and yet deeply rooted in the traditional Islamic Yoruba culture of Nigeria.

Fuji is hi-energy street music, heavily percussive which evolved out of the Islamic celebration of Ramadan, which became a major event in mid-20th century Lagos. Groups of young men walked through Muslim neighbourhoods at night singing improvised ‘wéré’ music to the accompaniment of pots, pans, drums, bells and anything else available, waking believers for the early morning prayer. By the early 1970s this music had crossed-over into popular Nigerian culture where it came to be known as Fuji, first made popular by the artist Alhaji Sikiru Ayinde Barrister, as the music began to be performed commonly at parties and social events.

In the 1970s and 1980s three Nigerian artists – King Sunny Adé, Chief Ebonezer Obey and Fela Kuti – all secured international major record deals bringing popularity to the Nigerian musical styles of Juju (Adé and Obey) and Afro-Beat (Fela Kuti’s unique mixture of highlife, funk and jazz) abroad, but in the process ignoring much of Nigeria’s rich musical landscape. Fuji is, alongside Highlife, Juju, Afro-Beat, Sakara, Afro-Reggae, Waka, Igbo rap, Apala and numerous others – one of these central styles of Nigerian music.

The singer Barrister described the music as follows: ‘Fuji music is a combination of music consisting of Sakara, Apala, Juju, Aro, Afro, Gudugudu, and possibly Highlife.’ Juju performer King Sunny Adé described the difference between the two styles of Fuji and Juju somewhat competitively thus: ‘Fuji music is more or less like my music without guitars. It’s like I’m singing in a major key and they are singing in a minor. The music itself is the music of Juju music.’