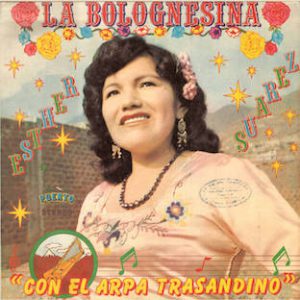 Esther Suarez, also known as La Ocrasina De Oro, is a popular Peruvian Huayno singer. La Bolognesina is one of her earlier albums, featuring reverbed vocals over Andean harps supplemented with light percussion and handclaps. The album was recorded in 1981, with the title referring to her roots near the snow-capped Andean mountains of the Bolognesi province in the Ancash region of Peru. Peru experienced waves of mass rural-to-urban migration in the latter half of the twentieth century due to poverty and political instability, but with it also came an explosion in the popularity of the folkloric Huayno tradition. An urban and modernized studio version of ancient indigenous Quechua folk traditions, Huayno became the soundtrack to the migrant’s experience of both hardship and homesickness. Esther Suarez’s clear and yearning vocals soar over galloping huayno rhythms, evoking the highlands of her youth with heartbreak, regret and melancholy, while simultaneously looking to a place where there is always a will to live and an invitation to dance. Truly some of the most beautiful music ever.
〜メーカーインフォより